Shakespeare fanatic, Shannon J. Reilly, talks about the greatest writer to ever live. Tune-in every Sunday and let’s talk about The Bard. 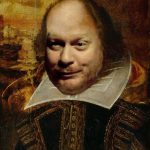 Writes The Funny at ShannonJReilly.com | GO TO HOST WEBSITE | VIEW PAST SHOWS

Shannon has spent more than thirty years as a professional writer, director and comedian.

As a writer, he was nominated for a regional Emmy for his television show "Tough Grit" (for which he also served as co-host) and has won various awards—including a Telly Award for his film shorts.

Shannon has two plays which are actively being produced on stages around the country: "Morbid Curiosity" a new comedy with spirit, received rave revues when it debuted June 2017 at Topeka Civic Theatre (the nation's oldest, continuously running dinner theatre) and "Voiceless" a romantic fable in two acts.

Shannon has directed over 300 productions plus formed and managed three professional improv comedy companies. Shannon holds a Master of Fine Arts degree from The University of Missouri at Kansas City.

Hey good-looking, it’s nice to see you back! We’d love to hear what you think of KSEF-DB, if you can spare a few moments. CHEERS!